FROM THE OCTOBER 2015 ISSUE OF INVESTMENT ADVISOR

You can design a cogent long-term portfolio for clients using today’s tools, and doing so can help separate your firm from the pack 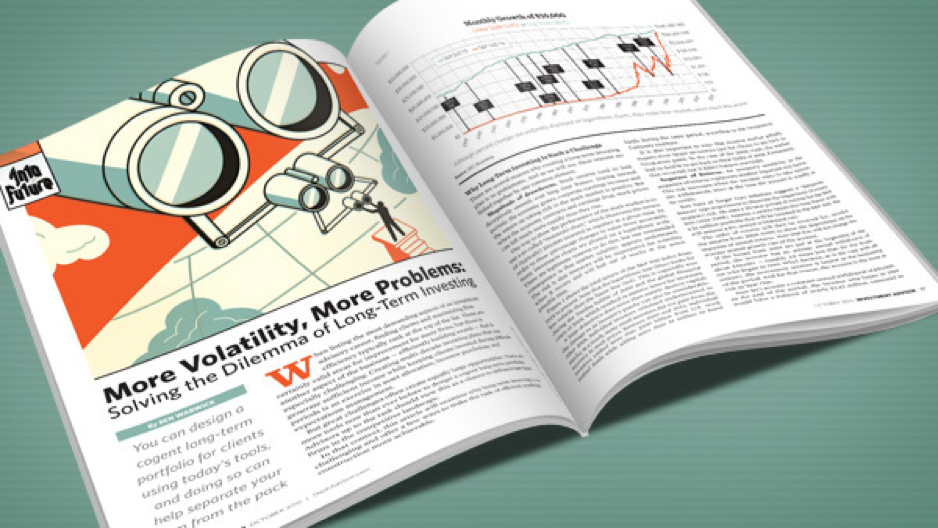 The challenges to a cogent long-term investing plan are linked by one common element: volatility. (Illustration: Harry Campbell/The Ispot.com)

When listing the most demanding aspects of an investment advisory career, finding clients and maximizing firm efficiency typically rank at the top of the list. Those are certainly valid areas for improvement for many firms, but there is another aspect of the business — efficiently building wealth — that is especially challenging. Creating multi-decade investing plans that can generate sufficient income while keeping clients invested during difficult periods is an exercise in asset allocation, investor psychology and expectations management.

But great challenges often create equally large opportunities. There are more tools now than ever before to design a cogent long-term portfolio. Advisors up to the task should view this as a chance to differentiate their firms in the competitive landscape.

In that context, this article will examine why long-term investing is so challenging and offer a few ways to make the task of efficient portfolio construction more achievable.

WHY LONG-TERM INVESTING IS SUCH A CHALLENGE

There are several reasons why creating a long-term investing plan is so problematic. And as we will see, these reasons are linked together by one common element.

Magnitude of drawdowns. Stock returns tend to look deceptively smooth over long time frames. During normal periods, the economy grows, corporate earnings increase and the return on taking risk in the stock market is positive. But when the economy contracts and earnings drop, stock prices can fall much more rapidly than they rise.

One way to show the performance of the stock market is to use a so-called “mountain chart,” which illustrates the return of (typically) $10,000 invested in equities at a given time. In order to show percentage changes in value more accurately, many investment charts are plotted on a logarithmic scale. There are legitimate reasons to do this, but one unintended consequence is that market volatility appears understated. The risk is that investors will be unprepared for volatility when it occurs and will bail out of stocks at the worst possible time.

Figure 1 (below) shows the total return of the S&P 500 index from 1934 to present. Note that the logarithmic line (blue) looks far less volatile than the linear line (red). This is especially true during the Nasdaq bubble of 2000 and the global financial crisis of 2008, which resulted in massive losses for investors. 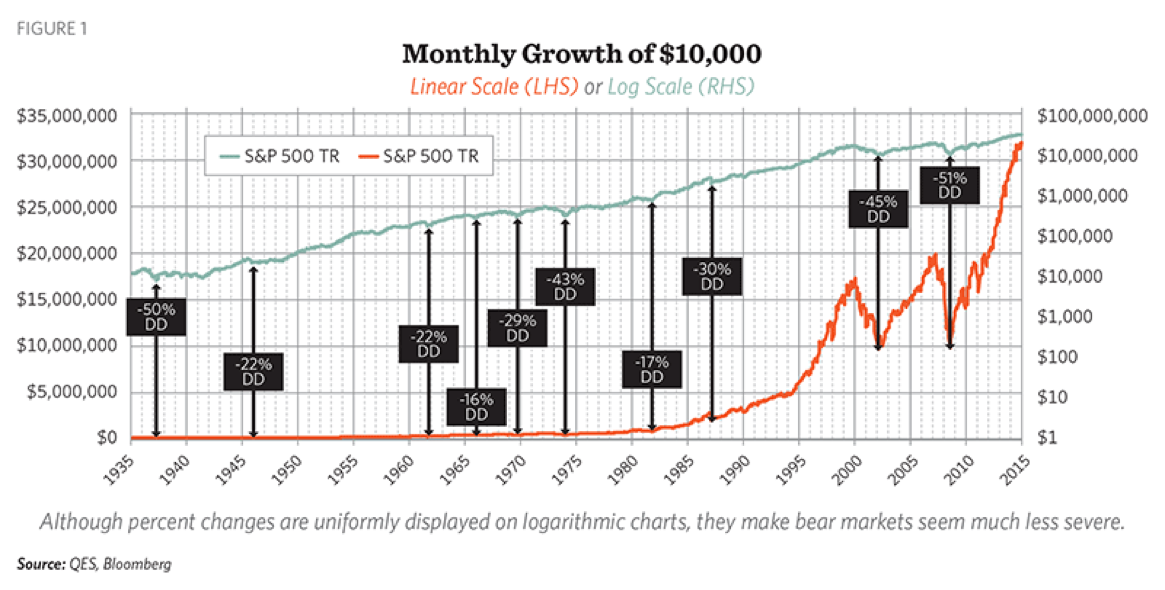 A large drawdown does more than merely destroy capital; the damage to an investor’s psyche can also be considerable. After 2008, individual investors remained underinvested in stocks; as a result, many small investors did not gain from the recovery in stock prices. Between 2008 and 2012, individual investors yanked more than $500 billion from U.S. stock mutual funds while adding more than $1 trillion to bond funds during the same period, according to the Investment Company Institute.

It is also important to note that massive market selloffs require even larger recoveries just for clients to get back to break-even point. In the case of the 2008 crash, the market had to double to get back to their highs of 2008. Fortunately, that occurred, but it didn’t happen overnight.

Sequence of Returns. An investor’s sensitivity to the sequence of returns represents another important risk factor. This risk increases when the investor starts to take systematic withdrawals, since at the time the account is usually at its zenith.

Ron Surz of Target Date Solutions suggests a “Benjamin Button” type experiment to illustrate the importance of return sequence risk. He uses a 20-year period of returns for the S&P 500 (1989-2008). Assume a retiree began this time frame with a $1 million portfolio that will be invested in the S&P 500. We will assume a 5% annual withdrawal rate.

The order of returns will then be reversed (i.e., reorder the returns from 2008–1989) to show the dependence on the sequence of annual returns. Note that this will not change the average annual growth rate of the account. 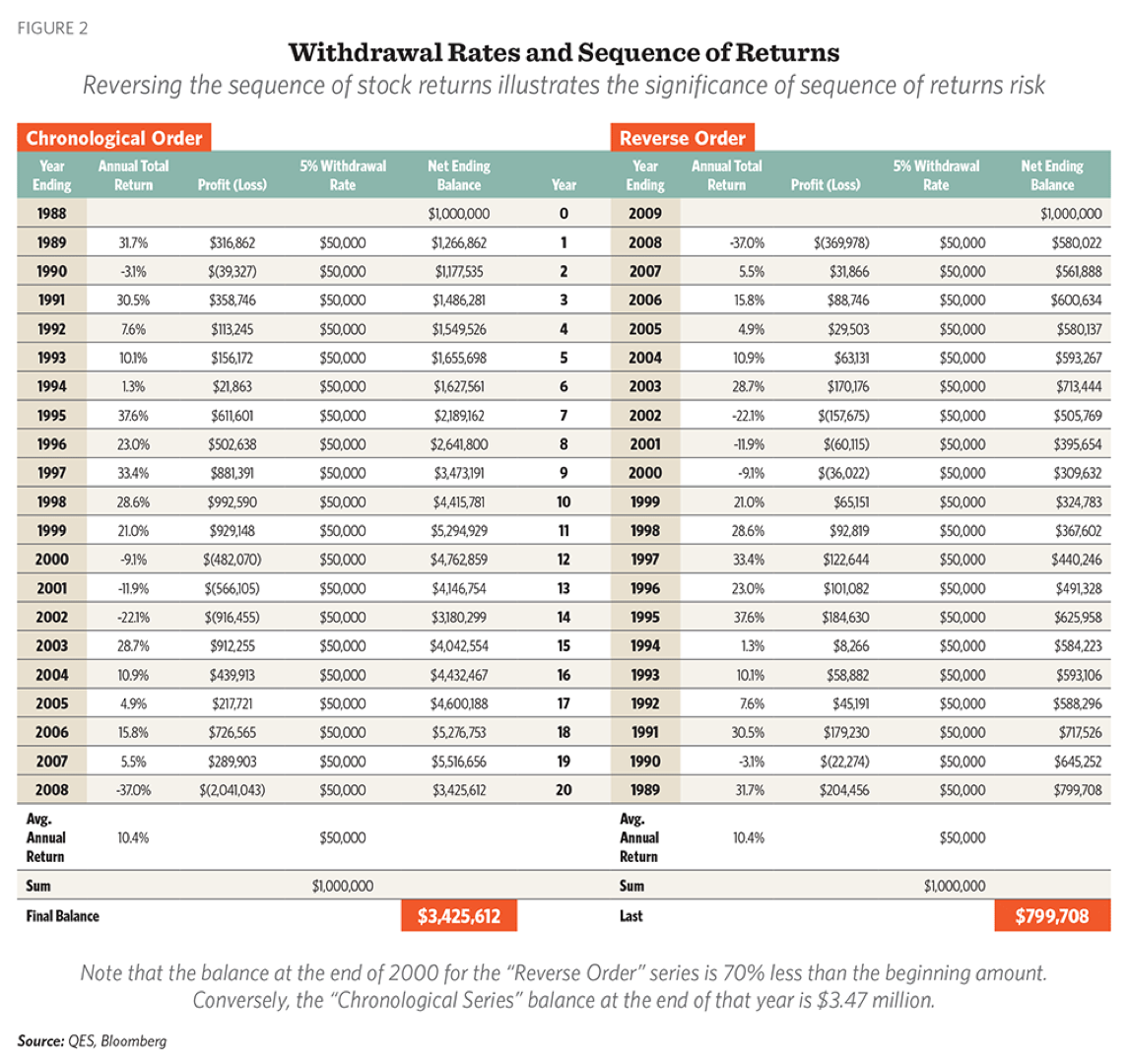 Volatility is the thread that links the above problems together. Without market volatility, drawdowns would not occur and the sequence of returns would be irrelevant.

The existence of volatility also renders the popular term “average annual return” meaningless. After all, market returns vary significantly each year, and to project a theoretical return on that basis is misleading.

Consider an investment that gains 100% in one year and loses 50% the next year. The annualized return of the investment would of course be 0%. But the average annual return would be (100% – 50%)/2 = 25%! This simple example illustrates the “revenge of compounding” and is caused by market volatility.

Sequence of returns risk further illustrates the futility of the average annual return metric. As was shown in Figure 2 above, portfolios with the same average return can have very different outcomes.

Fortunately, there is a way to directly measure the effects of market volatility on long-term investment returns.

A number of researchers have noted that volatility increases the difference between the average return and the actual return of an account. We can define the latter by the term compounded annual growth rate (CAGR). As its name implies, the CAGR incorporates compounding to determine the return on an investment.

As long as an investment exhibits price volatility, its average annual return will always exceed its CAGR. This is known as Jensen’s Inequality and can be approximated by the equation

The fallacy of average annual returns can be further illustrated with a Monte Carlo simulation, a problem-solving technique used to give a range of potential outcomes based on historical data. An analysis originally presented on the Advisor Perspectives website by Michael Edesess provides an excellent illustration of this concept.

The example considers an investor with a 30-year time frame who can choose either a bond paying 4.5% interest or an equity index with an 8% average annual return and 16% annual standard deviation.

Over the period, $1 invested in the bond will result in ending wealth of $3.75. The average terminal wealth for the stock investment, assuming a $1 beginning balance, is $10.

It seems obvious an investor would choose the equity index. But when one uses a Monte Carlo simulation to model the potential outcomes (not just the average result), a different picture emerges.

Figure 3 (below) shows the results of the analysis. Even though the average return for the equity index was $10, the most observed (or “mode”) terminal wealth was actually between $3 and $4. This difference occurs because the outcomes at the extreme end of the distribution skew the average away from the mode.

In the example above, it is not clear whether stocks are the best choice. The investor could have received a similar return with no volatility with the fixed income option.